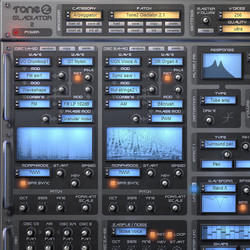 Tone2 has released version 2.2 of Gladiator, a virtual synthesizer plug-in for Windows PC and Mac.

Gladiator 2 gives you a groundbreaking approach to sound generation, while supporting an extensive list of synthesis methods, including Tone2’s award winning Harmonic Content Morphing (HCM) HCM uses a large, expandable collection of standard and resynthesized waves, these waves can be modified in real time, altering their harmonic structure. The innovative HCM synthesis covers new and unique aural territory, only possible with Gladiator.