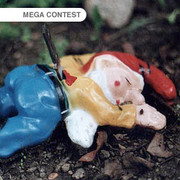 The time has come … the stakes are up … Tonehammer and Gnomehammer are proud to announce our first annual Christmas MEGA-Contest!

The contest is divided into two different categories: “Best Tonehammer Demo” and “Best Gnomehammer Demo”, which each represents opposite sides of the compositional spectrum.

To inspire you all and get the party going we have uploaded a new freebie today – known as “The Ball Choir”.

The Ball Choir represents a landmark in sampling as its the first time anybody has captured the sound of Santas manic dungeon. The patch is a delicate recording of Santa punishing the Gnomes for their negligent and reckless behavior. The patch is essentially a Helium Choir patch contain a nasty “Auuuuchhh” Gnomehammer scream, however the modwheel controls the amount of gnome testicle ball crunch sound, so use it care and do NOT try this at home!