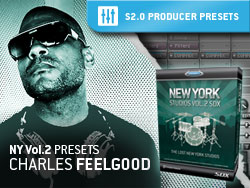 When we heard how electro producer, DJ and remixer Charles Feelgood (Diddy, Lady Gaga, Ashlee Simpson, Billie Holiday) had tweaked the New York Studios Vol. 2 SDX™ for Superior Drummer 2.0® to almost beyond recognition in his ingenious productions, we had no option but to have him design a unique set of presets so he could share his incomparable brand of electro, house and disco with the world.

Charles’ presets will introduce a whole new level to what is possible with the sounds and tools in Superior Drummer 2.0 and prove that the sky is literally the limit.