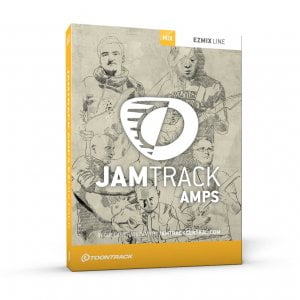 Toontrack and Jam Track Central have announced the release of the JamTrack Amps EZmix Pack, an expansion for EZmix 2 centered around the personal tones of five of Jam Track Central’s top guitar players.

“We have worked closely with Jam Track Central over the years, and knowing that a lot of our users are guitarists, it feels great to bring our respective brands together in a product that caters just as much to our customers as theirs”, said Peter Knutsson, Toontrack’s CEO.

“Toontrack’s products have historically played a big role in the creation of many of the backing tracks and lead tones that JTC and many of our artists use. It just felt right that this collaboration should happen. Now, customers can learn from their guitar heroes at JTC and sound like them, courtesy of Toontrack”, said Jonny Carpenter, Jam Track Central’s Co-Director.

This collection of guitar tones for EZmix 2 was crafted in collaboration with Jam Track Central, the number one training community for guitarists online. It was designed to display the incredible scope of the tones that some of the players at the top of the site’s roster call up for their day-to-day business. Expect anything from earth-shattering rhythm settings and brittle leads tailored for metal and heavy rock to warm tube-fuming blues-fuzz, the subdued elegance of jazz and an abundance of distinct fusion tones ready to cut through in any mix.

Welcome to one of the most diverse collections of guitar tones for EZmix 2 yet.

The JamTrack Amps EZmix Pack is available for purchase for 39 EUR.