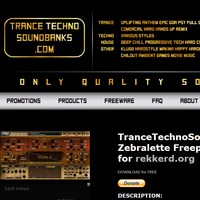 Trance Techno Soundbanks has announced the release of the Zebralette Freepack, a collection of free sounds for the Zebralette synthesizer instrument by u-he.

Pack is fantastic for any kind of trance and hard trance music, a bit for techno and chillout/ambient. Good for other electronic music too.

The promotion ends April 21st, 2013, after which 10 customers who bought a minimum of 1 soundset are randomly picked to get all current soundsets free of charge.