Plugin Boutique has launched a sale on the uBeat Series by Umlaut Audio, offering a 30% discount on the Kontakt drum loop libraries. 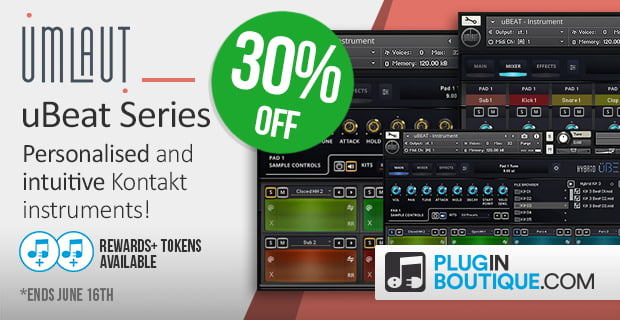 Want to lay down some uber beats in your next project? uBEAT Bundle lets you jam out like none other.

Get your creativity flowing and make your music stand out with this dynamic new drum loop library for Kontakt. Combining a traditional MIDI file library with an eight-pad drum machine-style instrument, uBEAT Bundle will kick-start your tracks in no time thanks to its intuitive workflow. Easily load MIDI loops along with their linked kits to get your productions flowing quick. Create endless variations of fresh loops by swapping out kits and their individual sounds. MIDI files can be dragged and dropped into your sequencer, letting you rework them for scorching beats all your own.

With three distinctive styles to choose from, uBEAT Bundle offers a world of beats in a sleek package, as well as consdirable savings over buying the instruments individually.