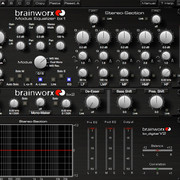 The SPL Vitalizer MK2-T is an authentic emulation of the popular tube-based Vitalizer hardware unit, a longtime staple of top mixing and post-production engineers. Offering a patented technology for greater perceived loudness and clarity without unnatural artifacts, the Vitalizer provides independent Bass and Mid-Hi processing that works in both the time and frequency domains to effectively unmask overlapping sounds. As both a fixative and an enhancement tool, the Vitalizer MK2-T is a mixing must-have.

These new UAD-2 Powered Plug-Ins are noteworthy both in their unique sonic capabilities, as well as their being developed in their entirety for the UAD-2 platform by the software engineers at SPL and Brainworx — two of the audio industry’s most respected brands — as part of a new UAD-2 SDK (software development kit).

Available for purchase via UA’s Online Store, the Brainworx bx_digital V2 EQ sells for $329 USD, and the SPL Vitalizer MK2-T sells for $249 USD.