Universal Audio has released UAD Software Version 5.7.0, including the EP-34, a classic tape echo plug-in, and the dbx 160, a compressor/limiter plug-in. 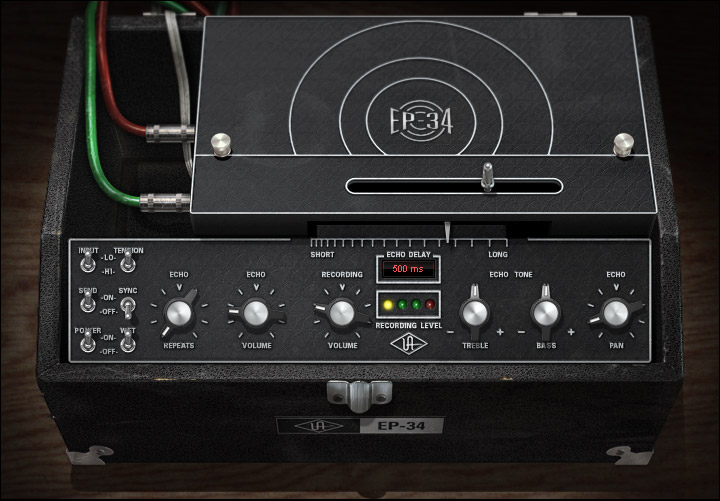 Universal Audio’s EP-34 Tape Echo plug-in gives guitar players and mix engineers the rich, warm tape delay effects of vintage Echoplex units, now on the UAD-2 Powered Plug-Ins platform for Mac and PC. One need only listen to classic recordings from Jimmy Page, Brian May, Chick Corea, Eddie Van Halen, Eric Johnson and Andy Summers to hear the Echoplex sound in action. Unlike other Echoplex emulations, the EP-34 is the first plug-in that targets specific behaviors of both the EP-3 and EP-4 Echoplexes.

The dbx® 160 compressor / limiter is a faithful plug-in emulation of the first commercially available VCA compressor.

The dbx 160 Compressor/Limiter is an officially licensed and faithful emulation of the legendary dbx 160 hardware compressor/limiter — still widely considered the best VCA compressor ever made. Originally designed and sold by David Blackmer in 1971, this solid-state design set the standard for performance and affordability. The dbx 160 (commonly referred to as the “VU”) is a highly regarded studio staple, famous for its simple control set and firm, distinct compression characteristics. Unlike later monolithic IC units, the “VU” uses a series of discrete components for gain reduction resulting in unique nonlinearities not found in other VCA compressors — a sonic distinction from later models. The UAD Powered Plug-In version of the dbx 160 captures all of the sonic nuances from our “golden” modeling unit, plus the simple control set of the original hardware, including Threshold, Compression (Ratio) and Output Gain. Just like with the hardware, LED threshold indicators are provided in the plug-in, as well the Input/Output/Gain Change VU meter for which the unit is famous.