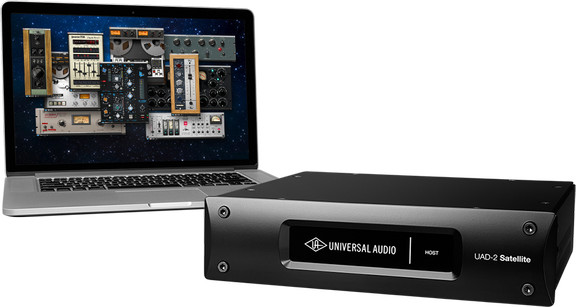 Available in QUAD or OCTO models with a choice of four or eight SHARC processors, UAD-2 Satellite Thunderbolt DSP Accelerators can also be integrated alongside UAD-2 PCIe cards and Thunderbolt-enabled Apollo interfaces, including Apollo Twin, Apollo, and Apollo 16 — for truly scalable mixing power.

For an immediate out-of-the-box mixing experience, UAD-2 Satellite Thunderbolt DSP Accelerators are available in Core, Custom, and Ultimate software packages. The Core package includes the Analog Classics Plus plug-in bundle, while Custom adds a choice of any three individual UAD plug-ins at registration. The Satellite Thunderbolt OCTO Ultimate is UA’s flagship package, including more than 79 UA-developed plug-ins — up to and including UAD software v7.8.