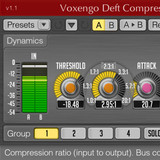 Voxengo has released version 1.1 of Deft Compressor, a compressor effect plug-in for Windows and Mac.

The characteristic feature of this compressor is its ability to produce “slim” and “slick” sounding compression, with intelligibility enhancement effect. Such result is achieved by compressor’s timing function that closely resembles the S-curve on both attack and release stages.

The S-curve timing function means that the attack and release stages “look” like S-curve (sigmoid curve). Such curve sonically adds a very warm coloration, without sharp edge. Beside that, S-curve on longer release times possesses a bit of “hold” time delay where it does not change. This allows the compressor to have clean, almost uncolored higher frequencies.

Note that for bus compression to be unnoticeable you may need to set both the “Threshold” and “Ratio” parameters to lower values (e.g. “-35” and “1.3:1”, respectively, for input signal with RMS power equal to -24 dBFS).

Deft Compressor is available to purchase as an effect plug-in for PC and Mac for $100 USD.