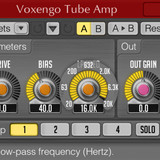 Voxengo MSED is a professional audio AU and VST plugin for mid/side processing which is able to encode (split) and decode mid/side signal from/to stereo signal. Tube Amp is an AU and VST plugin that can be used to add a slight valve warmness or a stronger overdrive to audio material.

MSED and Tube Amp are available to download as freeware effect plug-ins for PC and Mac (VST/AU).