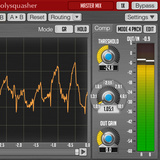 Voxengo has released version 2.2 of Polysquasher, a mastering compressor plug-in for PC and Mac.

Polysquasher was designed with a main goal: to be transparent. Polysquasher achieves its goal by using a unique compression algorithm which requires a small number of parameters – basically threshold and ratio only – making this compressor a joy to use. Polysquasher is best used as a finishing compressor inserted in the chain before the final mastering limiter.

Polysquasher is available in AudioUnit and VST plug-in formats, for Mac OS X and Windows computers, priced at $69.95 USD.