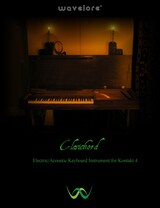 Wavelore has announced the release of Clavichord, a deeply sampled and programmed virtual clavichord for Kontakt.

This rare and beautiful keyboard instrument was a favorite of renaissance and barouque composers, as well as a popular practice instrument for organists (it’s extremely quiet!), though it fell into relative obscurity starting around the early nineteenth century. In the twentieth century, it’s best known, perhaps, in the form of its electronic offspring, the Hohner Clavinet, which we all know to be one the funkyiest sounding instruments on record. See Stevie Wonder’s “Superstition” for a well known example.

The clavichord is often referred to as the most intimate of keyboard instruments, mostly due to the fact that the player’s fingers are more directly in contact with the strings; The most unique aspect of its construction is that it allows the player to rock his or her finger on a key, producing a vibrato effect, or “bebung”…poly aftertouch well before its time!

The Wavelore clavichord faithfully reproduces all the defining and unique capabilites of its acoustic namesake, while also adding certain capabilities.

The Wavelore Clavichord is available to purchase in the Wavelore Group Buy for $89.99 USD (maximum group buy 50% discount already reached) until June 15, 2010. A free one-octave demo version is available to download from the product page.