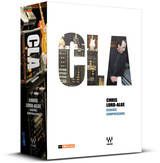 Waves has announced the release of CLA Classic Compressors, a series of four compressors for Windows and Mac.

Chris Lord-Alge is a true classic. Over the course of a career spanning almost three decades, he has worked alongside many artists who are classics in their own right.

The CLA Classic Compressors are available in native and TDM formats for $800 / $1,600 USD.

Dark Side of the Tune releases Drum Abrasion, Bent-O-Box and Lost Percussion