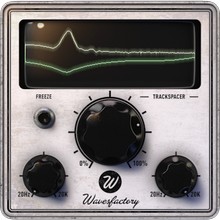 Wavesfactory has released its TrackSpacer effect plug-in for Windows and Mac.

TrackSpacer is an audio plug-in (available in VST, AU, and RTAS formats / Mac and Windows) that creates space in the mix for an instrument, voice, or other audio by performing automatic, multiband equalization on a channel.

In real-time it analyzes the audio frequency content in a track/bus via sidechain, and applies an intelligent 32-band EQ to subtract those frequencies from the channel/bus where TrackSpacer is inserted. In other words, it gives room or space to a certain track by reducing its frequencies on another track in real time.

TrackSpacer is available to purchase for the introductory price of 59 EUR until December 1st, 2012.