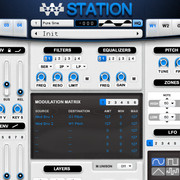 This time there are no new major features, only some small additions plus the big job of converting the whole code to 64 bit format. (yes, it was a big job, thank you Asseca for helping us out)

Currently the biggest change is 64 bit support. (we will still provide 32 bit versions as before) Sadly we had to drop all the Assembly code, so the new code is not greatly optimized as before, but we are still updating it where possible.

Wusik Station V7 for Windows (VST) is available to purchase for $75 USD.