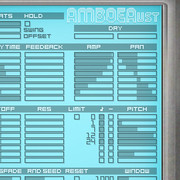 xoxos has released amboea, a delay effect plug-in for Windows.

amboea is a multitap/multidelay effect designed for ambient music. it arose from this discussion where i proposed a delay with irregularly spaced echoes. spirit described an effect that had varying synced echoes for ambient music, and this is my interpretation.

amboea for Windows (VST) is available to purchase for the introductory price of $10 USD until 1 March, 2011 (regular price $15 USD).