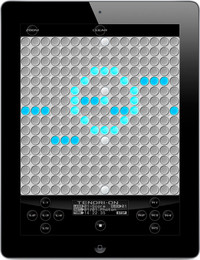 Yamaha has released TNR-i, a music app for iOS.

The iOS version of the world-renowned TENORI-ON brings you a completely new musical interface.

Even if you don’t know much about music, you can create music intuitively as if you were arranging sounds in space. The music that you see on the 16 × 16 grid of buttons is the music that is performed.

On the 16 × 16 grid of buttons, basically, the horizontal direction is time, and the vertical direction is pitch. By laying sounds on these buttons, you can combine rhythms and melodies to produce music. A button will glow when its sound is produced. The movements of the glowing lights produce a visual performance.