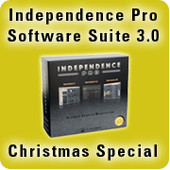 The INDEPENDENCE PRO 3.0 Software Suite is the ultimate package for music creation in your studio and for live perfomances – now bundled with Independence Pro, Independence Basic and all Independence Instruments but also available separately!

You can purchase Independence Pro with its premium 70GB sound library for ONLY 99.00 EUR incl. VAT – including the brand new Independence Pro Software Suite 3.0! With this amazing special we want to say a big, big “Thank You” to all our users for such a great year 2010.