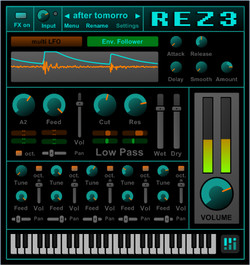 Rez3 is a Resonator FX VST plugin, it offers a multi LFO with 6 different waveforms and an envelope follower to modulate tone, feedback, filter cutoff and filter resonance.

Further it provides 6 independent resonator voices where the first of it is the master and all others can be detuned to the master note, each voice is also equipped with a pan slider and a range button which you can use to set the detune range between one octave and one semitone.

Rez3 for Windows (VST) is freeware, released as part of the KVR Developer Challenge 2014.