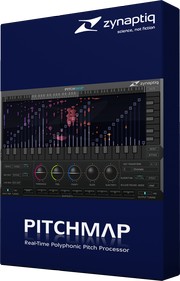 Zynaptiq has announced the release of Pitchmap, a real-time polyphonic pitch-mapping and pitch-correction plug-in for Windows and Mac.

PITCHMAP is a demixing-based plug-in that allows changing melodies and harmonies of any mixed musical recording in real-time, either by transforming them to new ones played on a MIDI keyboard, or by setting freely defined target scales. Based on Zynaptiq’s proprietary MAP artificial intelligence technology, PITCHMAP can be applied to a wide variety of tasks, including original music production, remix work, correction of tuning issues and creative manipulation of existing recordings. In addition, PITCHMAP provides functions to remove or extract individual sounds from a mix, and can apply advanced synthesizer-like sound transformations.

“We’re really excited to release PITCHMAP. ” Zynaptiq CEO Denis H. Goekdag said. “The intuitive real-time interaction with a mixed recording’s compositional aspects via live MIDI makes PITCHMAP an inspiring musical instrument, in addition to being a precision corrective tool. It quite literally lets you shape music with your hands, which we believe makes it an essential tool for composers, producers, remixers, mash-up artists, engineers and sound-designers.”

Pitchmap is currently available to purchase for Mac (AU) for the introductory price of 269 USD/EUR until April 1st, 2012 (regular price 399 USD/EUR). Prices in EUR inclusive of 19% VAT. VST and AAX support for both Mac and Windows platforms is planned for later in 2012.

A free trial version is available to download from Zynaptiq.