Mikron Orbiter was modeled after the chorus, tremolo and ensemble effects of the Solina Eminent 310 electronic organ. 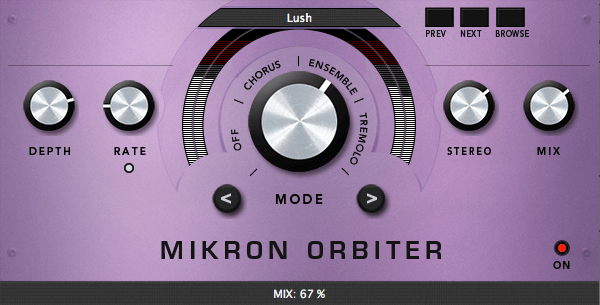 While we tried to recreate the sound of the original effects as accurate as possible, we added a few knobs to make them more versatile. You can control the width of the stereo field and mix between a dry and a wet signal. Furthermore, you can change the depth and rate that in the original organ were fixed.

When you leave the knobs Depth and Rate in their default settings, you get a close approximation of the original Eminent/Solina sound. However, changing these values can be great to create a little variation for different instruments you run through the effect. After all, you are not limited to the few basic sounds that came with the organ.

A last difference: you can make a smooth transition between the different modes, like the transition of the effects of a Leslie speaker. A feature that is so convenient that it makes us wonder why the makers of the Eminent didn’t add it. 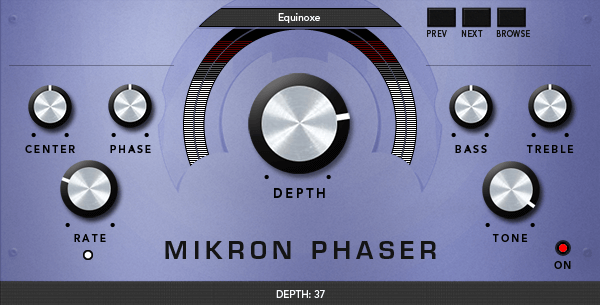 The effect was made particularly famous by the French composer Jean Michel Jarre who used it extensively on his recordings as a synthesizer effect. But of course it was used by countless legendary bands on guitar as well. The Police, Led Zeppelin, do we need say more? If you ask us, Small Stone Phaser is without doubt the best phaser ever made. It has a smooth, vibrant seventies sound that will never grow old, and is equally suited for guitar and synthesizer, and let’s not forget the bass.

While we tried to replicate the original sound of Small Stone Phaser as accurately as possible, we added a few modern details as well. First of all, it’s stereo. Secondly you can set not only the LFO rate and the ‘color’ of the phaser, but also adapt the center frequency, the degrees that the LFO’s will be out of phase, and how much the pitch will be modulated up and down. And finally the bass and treble knobs are a nice addition that can help sometimes to get the sound ‘just right’, to let it fit a little better in the mix.

Mikron Orbiter and Phaser are on sale for the intro price of 26 EUR / $29 USD each, or bundled for 44 EUR / $49 USD. A free 60-day demo is available for download in VST, AU and AAX plugin formats, with support for Native Instruments’ NKS.

Diverge Synthesis presets for Serum, Spire & more on sale at 80% OFF