Audiofier has released its latest addition to its Randomisers Series for Native Instruments Kontakt.

Abstrung is a double engine themed rompler that is geared towards “All things Strung” type of sounds. 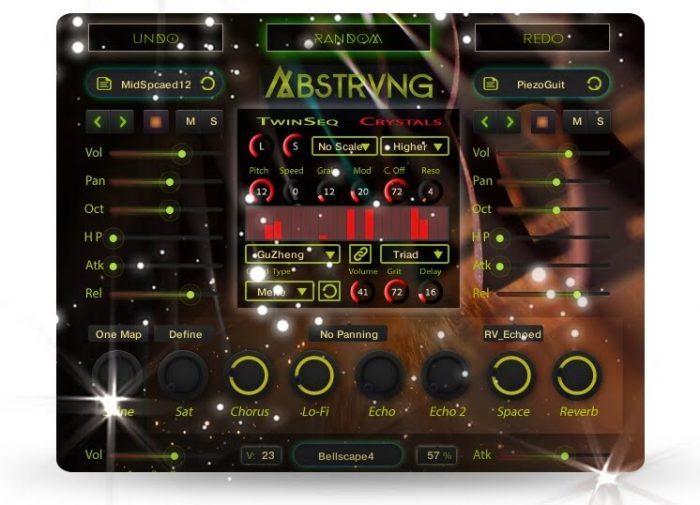 Audiofier’s Randomisers Series hosts the Crystals Generator, a special delay generator whose repetitions can be pitched in different ways. The delay lines can be filtered and blurred with the Cloud filter. Grains can be more or less pronounced to one’s taste. The repetitions can also be effected by distortion, phaser and an additional delay. Crystals can also be assigned to a different sound source from the ones that make up the main patch. Crystals can be harmonised in triads, fifths, suspended or can be generated randomly for a total inspiring sound creation.

Audiofier’s Randomisers Series include a twin step sequencer with randomisation option, a “Trails layer” which adds motion to each patch and a randomiser engine that makes it easy to create new sounds quickly and makes presets redundant. It’s also possible to recall past randomisations and go back and forth in the randomisation history, also recalling past randomisation on the fly.

Abstrung comes with 155 sound sources loadable in 2 different slots, plus 20 Trails. Each sound source is multisampled and comes with 3 round robins.

Abstrung for Kontakt 5.5 or higher (full version) costs $59 USD. Owners of Vesper can get a discount on Abstrung.