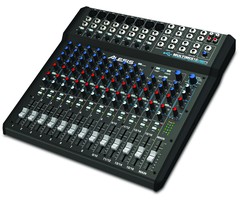 computer-based recording environments. Whether they are mixing a band or sub-mixing a group of inputs, such as a drumset, musicians will find the MultiMix 16 USB FX to be easy to use, rugged and feature-packed.

The MultiMix 16 USB FX gives users a selection of eight XLR inputs with switchable phantom power supply for condenser microphones. MultiMix 16 USB FX also provides 1/4-inch and RCA connectors for working with instruments and line-level audio sources, and guitarists will enjoy a guitar input, enabling them to plug their instruments directly into the mixer for amp-free recording.