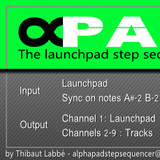 Thibaut Labbé has released version 1.2 of alphaPad, a step sequencer for the Novation Launchpad.

Alphapad was at first a personal project. I wanted to use my Launchpad as a step sequencer. Since I didn’t find any software to do that, I decided to program it myself. I realized then that other people would maybe be interested as well.

In view of the success of the first youtube video on the alphaPad, I wanted to continue improving the alphaPad and adding new functions. However, I cannot continue working on this project for free. That’s the reason why I decided to release the first version (1.0) of the alphaPad for free, as a demo version, and to propose the newer versions to those that support the alphaPad development.

alphaPad 1.0 is available as a free download for Windows (no saving function, delay issues; some delay appears when the patterns are edited). The latest version of alphaPad is available upon donation.