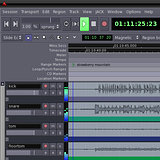 Open source digital audio workstation Ardour has been updated to version 2.8, a mostly-bugfix version that also comes with a couple of significant features.

I am pleased to announce the release of Ardour 2.8. As has been previously announced, the 2.X series is now in a state of “feature freeze” so that we can try to concentrate on Ardour 3.0, but as a gesture of thanks to the community for the support during February, I wanted to release this mostly-bugfix version that also comes with a couple of significant features. These include much more reliable VST support on Linux, track/bus templates and, with some important qualifications, AudioUnit state and preset handling.