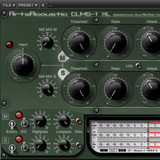 ArtsAcoustic has released version 1.0.12 of the CL Series, a bundle of dynamic processors for Windows and Mac.

The ArtsAcoustic CL Series is a bundle of 3 accurateley analog-modelled photoelectronic dynamic processors, nameley CL-1, CLMS-1 and CLMS-1 XL. They`re based on various analog optoelectronic diode tube compressor schematas used during the late 70`s up to the mid 80`s.