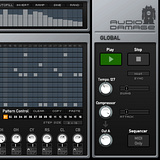 With twelve voices inspired by the famous X0X series of analog drum machines and an internal sequencer that is second to none, Tattoo makes an excellent addition to the arsenal for any electronic music producer.

Each of the twelve internal voices has been created using our proprietary D-Plane synthesis, and each has been extensively tested and tuned in order to have a broad palette. Every parameter of every voice has its own modulation sequencer, allowing for extensive motion within a pattern.

The grid sequencer in Tattoo is a whole world unto itself, with comprehensive randomization features and multiple sync modes, including a MIDI note sync to enable use with virtually any time signature, groove template, or host swing. The sequencer has MIDI out (VST only) to drive other sound sources, to double or replace Tattoo’s internal sounds.

In short, Tattoo is more than a simple drum synth; it is a complete rhythm programming environment.

Tattoo is available as an instrument plug-in for PC and Mac (AU/VST) for $79 USD.