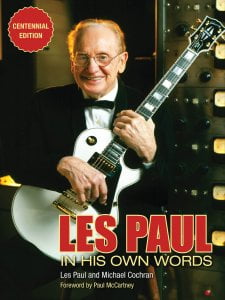 Backbeat Books has introduced Les Paul in His Own Words – Centennial Edition, a deluxe paperback volume by Les Paul and Michael Cochran, in which Les Paul tells his amazing life story.

In 2009, the legendary Les Paul passed away at the age of 94. In celebration of his life, Les Paul in His Own Words, capturing Paul’s own reflections on his remarkable inventions and guitar playing, was published in a high-end collector’s edition.

On June 9, 2015, a yearlong celebration of the 100th anniversary of Les Paul was launched nationwide. Backbeat Books is pleased to celebrate the legend once more in the first-ever paperback edition, Les Paul in His Own Words: Centennial Edition (March 2016, $29.99). This fascinating story about the “Father of Modern Music” celebrates his life and his legacy.

At 13, Paul took the tone arm from his father’sphonograph, jammed the heavy needleinto the top of his five-dollar guitar, and filledit with plaster of paris to quell feedback. Theguitar didn’t survive, but his idea worked. Les Paul had essentiallycreated the solid body electricguitar. He went on to alter countless guitarsin his quest to create the perfect sound,making one breakthrough after another alongthe way.

Nonstop experiments in his homemade recording studio led to the invention of sound-on-sound, multi-track recording, overdubbing, echo, and a host of other discoveries that revolutionized the recording industry, while he and wife Mary Ford dominated early 1950s pop charts with a continual string of hits.

Taken together, the enduring influence of his unique contributions to recording technology, instrument design, and American popular music are unsurpassed. Here, Les Paul tells the whole story as only he could and in his own words. From tales of his early days on the road and the inspirations that led to his world-changing inventions to his relationship with Mary and the aftermath of world fame, Les shares it all with unflinching honesty.

Les Paul in His Own Words: Centennial Edition is the definitive work on the recording and electric guitar pioneer whose prodigious talents and relentless work ethic singlehandedly launched a new era in American popular music. This authentic account of Les Paul’s life is packed with words of wisdom and experience from one of the most important contributors to modern music.

The book is available for purchase from Hall Leonard Books for $29.99 USD.