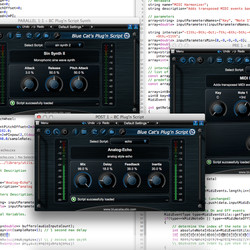 Blue Cat Audio has released version 1.1 of Blue Cat’s Plug’n Script, a new version of the scripting plug-in that can be programmed to build custom audio and MIDI effects or virtual instruments inside most Digital Audio Workstations (DAW).

A few bugs have also been fixed (details below). For this new release, Blue Cat Audio has also opened a scripts repository on GitHub for script writers and developers to share their scripts and experience.