Computer Music magazine has launched its fourth Facebook competition, teaming up with Camel Audio for a plug-in-packed giveaway. 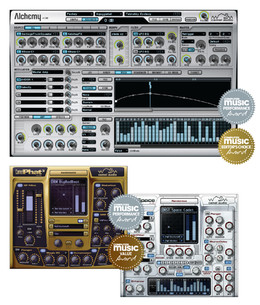 First prize is Alchemy (£179), which ranks among the elite of ultra-modern soft synths. It combines sample manipulation with additive, granular, spectral and virtual analogue synthesis, and has a massive 3GB sound library. In cm137 we described it as “an astonishing instrument”, awarding it a 9/10 score and our Editor’s Choice and Performance awards.

Second prize is CamelSpace (£54), a rhythmic multieffect that injects movement and life into any sound, while third prize is CamelPhat (£54), which likewise combines multiple effects into one dangerously phattening whole. Both were reviewed in cm89, receiving a 9/10 score and Performance and Value For Money awards.

Three runners-up can each select any Alchemy sound library – worth up to £39 – to take home. These work in Alchemy or the included Alchemy Player.

To join the competition simply ‘like’ Computer Music on Facebook to get the entry form link. The competition deadline is 29 April 2011.

Note: Due to competition laws, the competition is open only to UK and US residents aged 18+.