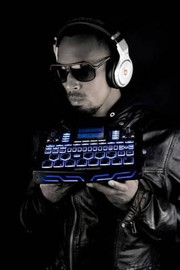 “We wanted everyone to be able to produce music the same way we do,” says Dallas Austin of the idea behind the Beat Thang. The Grammy-winning producer-songwriter-“keyboard fanatic” and owner of Atlanta-based Rowdy Electronics is introducing this groundbreaking mobile music-making machine through a joint venture with Nashville’s BKE (Beat Kangz Electronics.) The Beat Thang will go on sale exclusively at Best Buy July 17, 2011 as a limited edition with a suggested retail price of $1,500.

Fully portable but also able to integrate with a Mac or PC, the Thang has a 3.5-inch color video LCD screen. It offers endless customization possibilities, including the option to tailor your setting to wherever inspiration strikes – at home, in the club, on the corner, onstage, even in the studio. Its cutting-edge features can be enjoyed anywhere courtesy of a rechargeable battery and sturdy metal frame no heavier than a laptop.

“We’re musicians and beat-makers and artists, so the development of the Beat Thang got an extra layer of creativity and love,” says BKE President Aja Emmanuel, formerly a globe-trotting product specialist for Sam Ash Music and Samson Technologies and an independent hip-hop artist (perhaps best known for the 2002 album It’s Time.)

Emmanuel and Austin are proud to note that the Beat Thang has already won high-profile fans like Jermaine Dupri, P. Diddy, will.i.am, Jim Jonsin and “American Idol” in-house mentor Jimmy Iovine, who went so far as to introduce the handy piece of hardware to “AI” audiences. Austin will go even farther when he takes the Beat Thang with him to space aboard Richard Branson’s Virgin Galactic in 2013.

Here on Earth, Austin is co-hosting pre-release parties with Best Buy in Nashville, Atlanta, New York and Miami to demonstrate the Beat Thang for industry VIP’s. States Austin: “We’ll be showing everyone how you can sing into it, play keyboards into it, put beats into it – anything,” he says. “We’ll also have a few for pre-order because once we hit the release date, it’s anyone’s guess how many will be available to the industry. We only produced 1,000 units and the buzz is running pretty hot.”

Of course when Austin and Emmanuel started out in the music business, there was nothing like the Beat Thang. “It’s like we made a list of everything we’d ever wanted as producers…and then went to work to put it all in one powerful machine that we could take with us whenever we wanted” states Emmanuel.

Notes Austin: “I remember being 11 or 12 and going to the music store every day to play the instruments. I couldn’t afford any of them. And now Aja and I are going worldwide with the music machine of the future!”