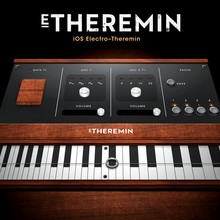 Design By Paul has released E Theremin, a theremin app for iOS

The E Theremin has three oscillators that generate a rich fat analogue tone, with a choice of 4 waveforms (saw, square, triangle and sine) octave shift and amp control. The E Theremin can achieve portamento, vibrato and quarter-tones with precise control. 4 presets allow you to store your sounds and jump quickly between them during performance.

The E Theremin is available from the iTunes App Store for free for a limited time.