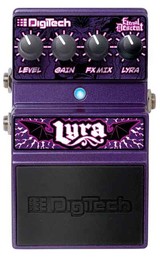 Eternal Descent is a comic book and music series unlike any other – and so is the new Eternal Descent Lyra, a limited edition multi-effects pedal that brings the sound of the globally popular series to guitarists everywhere.

Eternal Descent is a cross-genre story that blends elements of fantasy, action, music, superhero, gothic, science fiction, supernatural and other elements into an ongoing saga featuring Lyra, the series’ heroine. Lyra is a rock singer who is quick-witted, beautiful, talented, has attitude to spare – and is immersed in a battle with demons both internal and awaiting her at every turn.

Music is integral to Eternal Descent. Created by writer Llexi Leon, the comics revolve around the exploits of Lyra and her band, Constellation Nine, and rock and metal bands like Static X, Atreyu, Firewind, Shadows Fall and others have made guest appearances. A series of albums have been released that bring the comic to life with music created specifically for the series.

Featuring the Eternal Descent logo, distinctive Lyra graphic and a dark metallic purple finish, the DigiTech Lyra delivers the signature tones, sounds and effects that legendary producer/engineer Eddie Kramer (Jimi Hendrix, Led Zeppelin, Kiss and others) and his team used to record the Eternal Descent albums. Seven preset tones, from clean to moderate overdrive to crushing distortion are available that match seven songs from the albums.

The DigiTech Lyra is expected to ship in March 2011 priced at an estimated £159 RRP inc VAT in the UK.