DigiTech has announced the introduction of the iStomp pedal, an entirely new concept in guitar stompboxes that allows musicians to program the effect pedal with any sound they want – and change it at any time.

Offering almost limitless sonic possibilities, the iStomp connects to an iPod Touch®, iPhone®, or iPad® enabling musicians to load the effect of their choice into the iStomp. 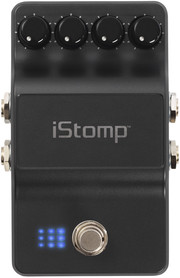 “The iStomp ushers in a new era in effects pedal functionality,” said Rob Urry, vice president, HARMAN Professional Division and general manager of Signal Processing and Amplifier Business Units. “Until now, guitarists and musicians had to buy a separate pedal for each effect they wanted and a separate pedal for different tones of the same effect. Now, musicians can buy an iStomp and configure an effect exactly the way they want, and later, they can simply download a different tone of that same effect or download an entirely different effect if they want to try something new.”

The iStomp pedal connects to an Apple iOS device using the DigiTech Smart Cable that comes with the iStomp. Once connected, the DigiTech Stomp Shop provides two of the most popular requested effects, the DigiTech Total Recall Delay and the DigiTech Redline Overdrive with the initial purchase. The app also offers access to additional effects that iStomp owners can browse, try out, and purchase for their stompbox. The iStomp pedal has four knobs to control effects parameters, which change their function according to which effect is loaded.

The DigiTech iStomp will begin shipping in January 2012 at $229.95 USD suggested retail. The iStomp pedal comes with an iOS authorization cable, power supply and the two initial downloads. Additional downloads are available for $4.99 USD to $19.99 USD each.