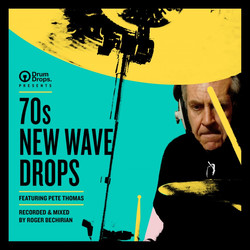 Producer/engineer Roger Bechirian came in to record, mix and produce the drum tracks on ’70s New Wave Drops’. Roger was responsible for recording and mixing many of Elvis Costello’s albums, as well as other New Wave records by the likes of Nick Lowe, Squeeze and The Undertones making him an obvious choice for the production of ‘70s New Wave Drops’.

The selection of tracks range in tempo from 80 BPM to 167 BPM and the grooves are full of driving snares and tom fills. For fans of Elvis Costello they will recognise a number of the tracks – ‘I Don’t Want to Go To Chelsea’, ‘Oliver’s Army’, ‘Radio Radio’, ‘Pump It Up’ are just some of the featured grooves.

The kit used was a Hybrid Gretsch kit and a more modern DW Collector Series provided by London based Drumhire (www.drumhire.com). We used the DW kick drum with Gretsch toms and Zildjian A Cymbals. Two snares were used: Pete Thomas’ Ludwig 400 snare (which is the very same snare Pete used on the original tracks); and a 1970’s Ludwig Black Beauty snare.

The album was recorded in Miloco’s The Square recording studio, London using an SSL G Series console with Telefunken and Calrec mic pre’s. The kit was mic’d up with 12 microphones including Coles Ribbons, Neumann U47 Fets and AKG C28 valve mics. All of the tracks were recorded on to a 16 track Analogue 2” machine. The Square has recently been used by bands and artists such as Hurts, The Vaccines, The Kooks, Paulo Nutini and Plan B.

Mixing took place in Miloco’s The Engine Room, which is based around an SSL G Series console and a collection of outboard including EAR valve EQs, Manley Vari-Mu Compressors and Calrec PQ1161 EQs, all of which featured prominently in the album mixes.

Drumdrops offers the ’70s New Wave Drops’ as drum multi-tracks, mixes & drum stems and drum loops. All of the multi-tracks come with session templates for Pro Tools, Logic, Cubase, Ableton Live, Reaper and Studio One. An OMF file is also provided should you need to export the 24 bit 44.1 WAVs into any other DAW. A beat tempo map is included to help users sync up the drum machines.

The stem and mix packs come with the full mix of drums, as well as separate drum stems of each individual drum component. The stems are designed for those who want the ready-mixed versions of the drums so that you can build your track quickly.

The drum loops packs contain around 8 different 4-bar loops taken from each track and are provided as mixes of the individual drum parts, as well as the full mix. Available formatted as WAVs, Apple Loops and Rex2 files, they can be dropped into any software, sampler or drum machine.