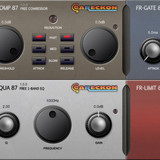 eaReckon has released version 1.0.1 of the FREE87 series, a collection of free VST effect plug-ins for Windows.

The FREE87 series is based on the upcoming ANALOG87 series which features a set of 5 high quality analog-style VST effects for Windows. Instead of just providing a limited demo of the ANALOG87 series, eaReckon is glad to offer fully working free plugins using the same engine.

The FREE87 series plug-ins are available to download as free VST effect plug-ins for Windows PC.