EASTWEST has announced it is now shipping Hollywood Brass, a massive 150GB instrument that features unprecedented sound quality and the brand new PLAY 3 playback engine for the very latest in performance and control. 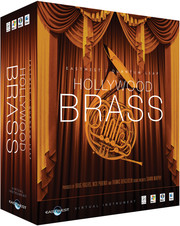 Hollywood Brass adds to EASTWEST’s multiple award-winning Hollywood Strings Virtual Instrument as the second installment in the Hollywood series, once again combining the talents of Doug Rogers, Nick Phoenix, Thomas Bergersen and Shawn Murphy. Recorded in place at EastWest Studio 1, widely regarded as the “best brass recording room in the entire world” with 5 user-controllable mic positions (Diamond Edition), Hollywood Brass is designed to work seamlessly with Hollywood Strings (and the upcoming Woodwinds and Percussion) for the ultimate in virtual Hollywood scoring.

EASTWEST/QUANTUM LEAP Hollywood Brass is now available for the introductory price of $795 USD for the Diamond Edition, and $495 USD for the Gold Edition. Offer valid through August 15, 2011 (regular $995/$595 USD MSRP respectively).