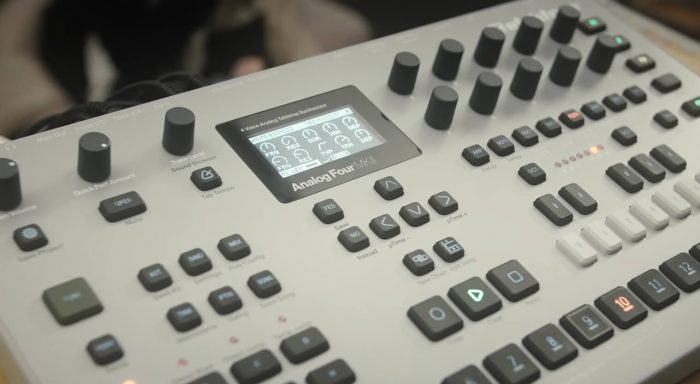 Analog Four MKII is a four voice analog tabletop synthesizer. The sequencer gives total access to all aspects of the analog sounds and the four CV/Gate outputs mean external gear can be controlled as well.

The analog circuitry of Analog Four MKII has been thoroughly reworked and provides deep, clear and defined bass plus a more prominent analog overdrive/distortion effect. Integrating the Analog Four MKII with external gear and computers is easy thanks to dedicated audio outputs for each voice, two expression/CV inputs, and high bandwidth Overbridge.

The aluminium enclosure, the durable back-lit buttons, the big OLED screen, the hi-res encoders and the dedicated quick performance controls are other notable enhancements. They make the workflow quicker and more efficient. The total Analog Four MKII package is very complete, and offers an experience as close to sublime you can get.