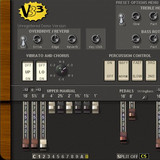 GSi has released version 1.4 of VB3, a virtual organ instrument plug-in for Windows and Mac.

VB3 is a virtual tonewheel organ which simulates an american electromagnetic organ of the old days, but it’s also capable of other simulations like the italian transistor organs of the seventies or the red-tolex organs played by famous pop bands of the sixties.

VB3 is available to purchase as an instrument plug-in for PC and Mac (VST/AU) for 39 EUR.