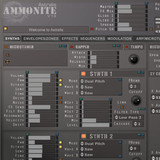 I’m pleased to announce v1.01 of Ammonite which fixes a few bugs, most importantly the instability caused when using multiple versions, as well as some great new features such as Synced, Amplitude Modulation and Ring Modulation Oscillator Mix modes. There are also another couple of presets banks. The file structure has changed in this release, particularly the images folder, and so it is recommended that you remove the old version before extracting the new release.

Ammonite for Windows is still available to purchase for the introductory price of $30 USD (regular $55 USD).