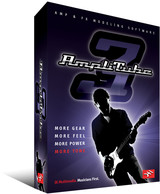 AmpliTube 3 raises the industry standard of sound variety, realism and creative power – with over 160 precisely modeled pieces of vintage and modern gear available in one package – it is the ultimate tone gear collection for players, producers and engineers.

AmpliTube 3 will ship within February 2010 as VST, RTAS and Audio Unit plug-in formats and as standalone software for Mac and Windows, and will be available in the following versions and MSRP prices (excl. VAT):

Additionally, AmpliTube 3 will also be available as a complete software + hardware solution for playing and recording in a bundle with the StealthPedal for $399.99/€299.99

Preorders are already available in the IK Online Store and in IK Multimedia’s network of selected dealers and distributors worldwide.