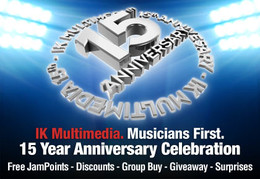 IK Multimedia has announced it is celebration its 15th Anniversary Promotion, with an unprecedented series of prizes and promotions.

To celebrate this milestone, IK Multimedia is bringing you some amazing deals and giveaways from June 15 to September 15, 2011 as we celebrate this history of hard work and success with an unprecedented series of prizes and promotions.