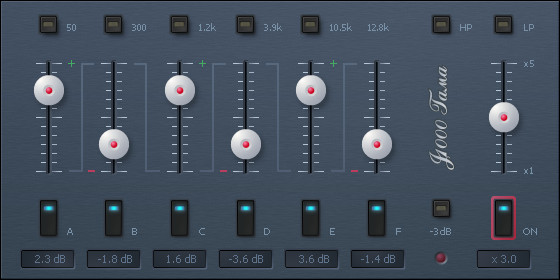 J1000 GAMMA is equalizer intended primarily for mastering, probably first of it’s kind. It is based on Fletcher-Munson curve, allowing you only to accent the parts of audio spectrum where ear is less sensitive and lower the ones where ear is more sensitive. Six faders control gain amounts of six corresponding peak filters. Each filter has fixed Q factor and few selectable central frequencies, except for the last one (labeled F) which is permanently set at 12.8kHz. On the right part of interface there is master multiply fader which controls total amount of EQ-ing applied, HP and LP filter switches, clip indicator and simple button for reducing input signal by 3dB. Beware – this plugin is tempting to be overused.

J1000 DELTA is mixing equalizer with a twist. It shares the same HP/LP and output section as Beta. The obvious differnce is the way Delta handles audio via it’s tilt and concurve modules. Actually, they are just pairs of filters that are set to work parallely. In case of tilt when one filter goes up, other goes down. Since their central frequencies are far apart, it results in spectrum tilting. In case of concurve, which name derives from convex/concave curve, both filters react the same way, so when you move [C] fader up the spectrum “smiles”, and when you move it down it “frowns”. Loudness difference is automatically compensated. Both modules offer three selectable curve modes. Switches labeled diametric flip left channel processing for each module, so you get diametrically opposite responses for left and right channel. Therefore, Delta can be used instead of classic panning controls for greater creativity regarding stereo image.

Changes in Gamma and Delta v2.0

J1000 Gamma and Delta are available to download as freeware VST effect plug-ins for Windows.