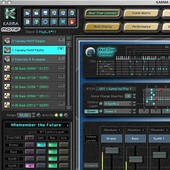 This brand-new entry in their line of software applications brings the award-winning and patented KARMA algorithmic music technology, previously only available for Korg workstations, to the Yamaha Motif XS and the new Yamaha Motif XF platforms.

KARMA Motif Software for PC and Mac is available directly from Karma-Lab, and is slated to be available in April 2011, priced at $199 USD.