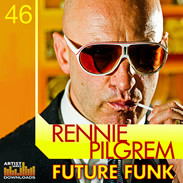 Loopmasters has released Rennie Pilgrem Future Funk, a sample library featuring a fresh collection of samples from the one and only – Rennie Pilgrem.

Rennie’s award-winning career in Dance has so far taken him around the World many times over. As well as releasing over 100 singles on his TCR imprint he has remixed a who’s who of electronic music…..Afrika Bambaata, Arthur Baker, Ferry Corsten, Timo Maas, Simple Minds, Filter, BT, Easy Rollers, Elite Force, Meat Katie, Uberzone, Braund Reynolds and many more.

Son of a jazz trumpeter, Rennie grew up listening to Charlie Parker and playing various funk bands. As an electronic music producer he is often considered responsible for the creation of the nu skool breaks genre. Before moving into breaks Rennie produced techno and acid house and was part of the influential rave group Rhythm Section along with Ellis Dee. Rennie is also the boss of Thursday Club Recordings aka TCR a label which he founded in 1993.

This versatile collection features a wealth of live played loops and samples including Guitar, Horns and Drums to complement the electronic influences, making this the perfect sample pack for producers creating Nu Disco, Future Funk, Breaks, House and Downtempo tracks.

Rennie Pilgrem Future Funk is available to purchase for £24.95 GBP.