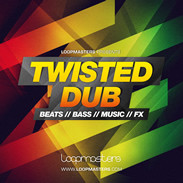 Loopmasters has released Twisted Dub, a sample library by Dubmatix.

Deep and Heavy Bass loops, Bubbling Organs, Clavinets and Wurlitzers sit alongside broken down Percussive loops, Bleeps, Dubbed Out Atmospheres and Echoes in a new collection of inspirational sounds designed by Dubmatix who produced the award winning Automatic Reggae artist pack for us previously.

Twisted Dub is available to purchase for £29.95 GBP.