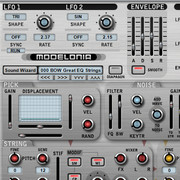 NUSofting has announced the release of a public beta 2.0 of Modelonia, a virtual instrument plugin.

Modelonia is a powerful “physical modeling” synth which uses a hybrid of two distinct model ‘types’ – a plucked-string model, and a blown-bore (ie trumpet-type) model. Each model may be used simultaneously, and the signal path allows cross-modulation between the two models for more interesting and complex tones.

Please note that for many presets the modules named “String” and “Horn” don’t always sound like strings or horns, since the resonators can be used interactively, therefore you can simply think of them as resonator 1 and resonator 2, abstractly. The same goes for the “exciter” modules named “Pick”, “Noise” and “Lips”, you can call them exciter 1, exciter 2 and exciter 3, “Pick” is an impulse generator, “Noise” generates filtered noise, “Lips” generates a continuos tone which is modulated by the “Horn” resonator.

The free beta includes 46 presets, and it features many enhancements and changes compared to the previous release, Modelonia 1.7 – 1.8

Modelonia 2.0 Public Beta for is available as a free download (currently Windows VSTi only, Mac AU beta may come later). It expires September, 2011.