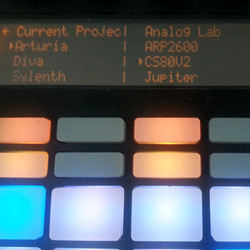 Mabelton Audio has announced the release of the DCAM Synth Squad/Ableton Push Integration Pack, an instant way to use popular third party VSTs with Push in the same way as Ableton instruments.

The DCAM Synth Squad VST Plug Ins Pack will allow you to:

(You must own DCAM Synth Squad and Push to use this pack. Note that for Fusion, all the top level presets can be loaded from Push. Second level presets must be changed manually as usual)

The integration pack is available for purchase for £14.99 GBP.