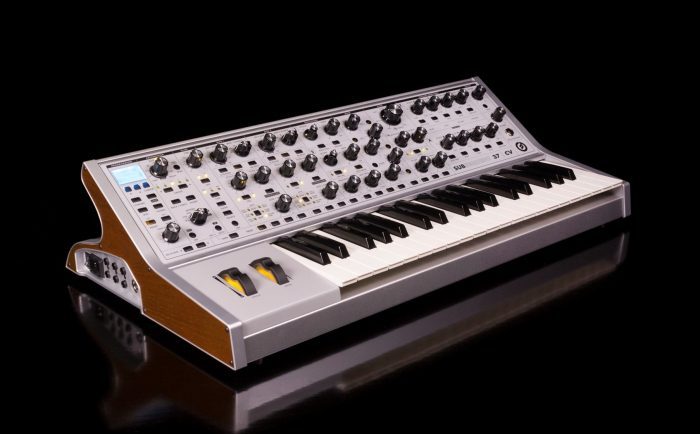 Anchored by a pair of solid aluminum side pieces inset with North American hardwood and affixed to a rugged steel and aluminum enclosure, it features four assignable CV outputs and two assignable Gate outputs for interconnectivity with large-format and Eurorack modular systems, an upgraded keybed for improved playability, a high-powered headphone amplifier for live-monitoring, and a modified analog signal path.

“We are really excited to incorporate community feedback into the evolution of an instrument. Adding CV interconnectivity was the starting point, but we have also increased the headroom in the mixer and significantly extended the range of Multidrive, giving the SUBSEQUENT 37 CV expanded sonic capability and modular control.” – Cyril Lance, Moog Chief Engineer

The SUBSEQUENT 37 CV’s mixer now has double the headroom of the Sub 37 Tribute Edition. Taking advantage of the mixer’s newfound flexibility, the gain-staging of the Ladder filter has been reshaped to boost harmonic saturation and analog compression. Completing the sonic evolution is a re-tuned Multidrive circuit that extends well beyond the grit and growl of the original Sub 37.

The first 125 SUBsequent 37 CV units are available for purchase exclusively through Guitar Center during Moogfest 2017, May 18th-22nd, and on guitarcenter.com.